40 years behind the wheel chapter 1 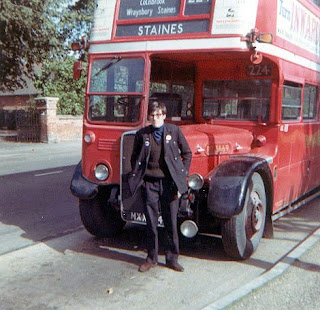 Watching buses running passed Willesden Technical College, on a beautiful spring afternoon, seemed far more interesting than solving quadratic equations. I began to wonder what it would be like to drive one of those big red buses. The next logical step was to actually drive one of those buses, and so began my career as a bus driver.
During the 1960s London Transport were so short of drivers that one could choose the time and place to take a preliminary driving test. I was twenty one and had spent the last three years working at the GPO research station at Dollis Hill North London, and I wanted a change.
Never having driven anything bigger than our family Vauxhall Viva I played safe and arranged with London Transport to take my preliminary test on a Sunday morning from Hendon garage, it should be nice and quiet on a Sunday, and it was.
Sunday the twelfth of March 1967 was a ideal spring morning, blue sky and not too hot, when I arrived at Hendon garage for my preliminary test.
I entered the garage and met my driving instructor, I boarded the bus with him and sat inside whilst he examined my driving license. Earlier in the week I had gone to the Licensing Department at Dawley House Ealing in London to have my driving licence endorsed so that I might drive a large vehicle. He asked me if I had ever driven a vehicle with a pre-select gear box before, I said I hadn’t. “Just use the pre-select pedal as an ordinary clutch pedal until you get use to the pre-select gear shift.” Hendon garage was very gloomy inside and it also had a very narrow entrance. The instructor said he would drive the bus out of the garage and I would take over on the main road opposite Hendon Town Hall. The bus I was to drive was an RTW which was eight foot wide compared with the normal London RT bus used in service which was seven foot six inches wide.
Climbing up into the cab was a wonderful feeling, both nervous and yet exciting. Everything was so large compared to a car. An enormous steering wheel, large operating pedals and a large gear select unit attached to the steering column.
Ever since I was a young boy I had always been trying to work out how the bus drivers changed gears. I would sit in the front nearside seat and look through at the driver but could never understand how the gear shift coincided with the engine sounds. I was about to find out.
I was told to take my time and proceed towards West Hendon. I certainly wasn’t going to hurry. It seemed as if this huge vehicle was propelling me forward and I had very little control over it. However after a short time the vehicle began to shrink in size and by keeping a constant eye on both mirrors I began to feel at ease with the bus. At first gear changes were not smooth as I was using the operating pedal as one would a clutch. A few words from the instructor soon put me right.
With a pre-select box one selects the gear with the gear lever and when that gears is required one pushes the operating pedal down and then releases it straight away. So whilst the bus is in first gear at a bus stop one would select second gear and once the bus had reached the appropriate speed the operating pedal would be used and then either third gear selected, or if the bus were to be slowed down again then first gear could be selected.
I drove along The Burroughs across Watford Way and down Station Road turning left into West Hendon Broadway. Thirty years ago there was no Brent cross flyover nor a Brent Cross shopping centre just a cross roads and a set of traffic lights along side the Hendon Greyhound race track. I turned left again onto the North Circular. I had a feeling then that this was the thing I could do for the rest of my life, there was a sense of freedom and yet one of responsibility. A further left turn took me into Brent Street and finally back to the Hendon garage, parking outside the garage. The instructor drove the bus into the garage whilst I sat inside the bus. Once inside the garage he sat down with me went over my test drive. He said he was very pleased with my steady driving and was glad I had heeded his instructions to take it easy, as many new drivers wanted to rush about which was something you just did not need to do with a London bus. I didn’t tell him I was taking it easy as I was so apprehensive of this large red bus pushing me along.
I was given a form to say I had passed a London Transport preliminary driving test and if I wanted employment as a London Bus driver I was to report to London Transport headquarters at 55, The Broadway for a medical and allocation to a Bus Garage. The next step was not going to be quite so easy.
Posted by David at 14:53