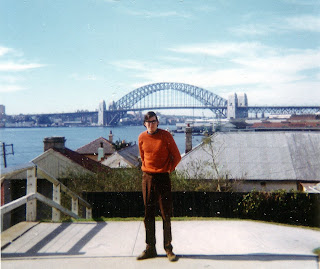 With the promise of a job and a new family to meet, Annette and I flew from Gatwick Airport on the 24th June 1970 courtesy of the Australian Government on a Boeing 707 of Caledonian Airways to Sydney. Unlike to-days service with one stop at Singapore or Hong Kong the Boeing 707 made several stops for refuelling and after a long flight we arrived early one morning in Sydney, mid winter, which was quite warm and a pleasant surprise for me. However Annette’s family live in Canberra the Capital city of Australia which sits 2000ft above sea level and is situated some 200 miles in land, and Canberra is bitterly cold in the winter. After passing through immigration control we were directed to the domestic airport terminal where we boarded a Lockheed Electra turbo- prop for our turbulent flight to Canberra.
Not only was it freezing cold but a bitter disappointment lay waiting for me when I applied to become a bus driver.
Soon after arriving in Canberra I applied for a job as a bus driver only to find out that there was a two year waiting list. I had travelled half way around the world hoping to continue doing a job I loved only to be told “no job” I was shattered. I could become a bus driver in Sydney or Melbourne right away, but not here in Canberra and Annette had come back to Australia to be near her parents so a move to another city was out of the question.
Canberra is the Australian national capital and a really beautiful city, but it abounds with politicians and politicians require chauffeurs, who do very little driving and a lot of sitting around, and the chauffeurs are recruited from the ranks of the bus drivers hence the long waiting list to become bus drivers.
Annette and I stayed briefly with Annette's parents until we found a place of our own in Queanbeyan, a small town a few miles from Canberra just inside the New South Wales boarder. Fortunately I had qualified as a GPO technician and was therefore able to get a job straight away as a telephone installation engineer and was soon driving my own PMG (Post Master General) truck, not quite as big as a bus, but it was red.
I really missed those London buses and spent hours pouring over photos in ‘London Buses In Camera’ by John A. Gray a book I must have had on permanent loan from the local library in Dickson next to the PMG depot.
I even taught myself to draw buses. (I purchased the book when I arrived back in England and those early drawings are still in the back of my copy).
Although Annette and I settled in and had some lovely times in Australia the yearning to get back to the London buses proved too strong. By then Annette was also missing England, so we made the decision to return to England. We had also decided to start our family, with hindsight not the best thought out plan, and so with Annette pregnant we began our journey back.
When I’d left the UK I had kept my PSV (Public Service Vehicle) badge No N 86167 as a souvenir. It should have been handed back to the Public Carriage Office and I thought this might be held against me when reapplying for a new licence and so I posted it back to London. I was quite surprised to receive a postal order for 2/6p (12.5 new pence) from the Public Carriage Office for the return of my badge.
In preparation for my return to the UK I had written to London Transport asking for a list of garages which had vacancies and was delighted to receive by return post a letter informing me of vacancies at all Central Bus garages and a list of those garages in the Country Area which had vacancies.
Annette I decided to make the trip home a holiday and I set about booking us a cabin on one of the P&O liners back to the UK. During our two year stay in Australia (two years was the minimum stay required by the Australian Immigration Office under the £10: scheme) we had kept in touch with my good friend Ken Smith. In early 1972 Ken wrote and told us how, suddenly house prices were going up at the rate of £100:00 a week. Whilst I was working as a telephone engineer Annette had returned to her old job with the Department of the Interior building section and we were saving her wages, approximately £100:00 a week. If we stayed in Australia much longer we would not be able to afford a house when we got back to England. We decided to cut our losses and fly back. I cancelled our booking with P&O and booked a flight back with Qantas.
So on a cold winters afternoon on the 1st July 1972 we said our farewells to Annettes family at Sydney’s Kingford Smith airport and began our journey back to England.
Posted by David at 09:20