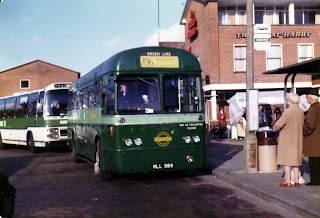 Remembering how nervous I had felt on my first trip to Chelsham I thought it would be a good idea if new one man bus and coach drivers were accompanied by an instructor and obviously so did the powers that be. So it was no surprise when a notice was posted on the notice board at Tring for volunteers to apply for the position of OMO Instructor. I applied for and was accepted as an Instructor subject to successful training at the Central Driving school at St Albans garage. So one Spring morning I and the other successful applicants from the London Country garages met up with Driving Instructor Bob Spence and Conductor Instructor Wilcox for a pleasant days outing. Each of us in turn would be either a driver or an OMO Instructor whist the two Instructors would be either very awkward passengers or Instruct us to handle both the ‘passenger’ and the new driver.
From this time onwards all new drivers when converting to one man operating would have five days of training with an Instructor showing him how to handle both passengers and the correct procedure for issuing tickets. We, as OMO Instructors were not there to criticise or correct a driver’s way of driving, as the driver was deemed to be competent having passed a PSV test. However if the poor driver was getting flustered or making a few mistakes it was preferable to let him have a break and take over the driving rather than have a new driver give up and leave the job because of the extreme pressure a new driver could find himself under for the first week or so until he had settled in to a routine.
May 1975 saw the conversion of all of our 301/2 buses from crew operation to OMO operation and the introduction of the horrendous Leyland National bus which we had had to endure on the 706 coach route since its introduction to Tring in March 1973. Therefore new drivers coming to Tring after 1975 had no opportunity to learn conducting before becoming drivers and were literally thrown in at the deep end. Additional OMO instructors were required now. All new drivers spent three days with an OMO instructor on bus routes and a final two days on the coaches with an OMO instructor, at Tring that was me. I really felt sorry for those drivers I took out, as many of them had never driven into London before.
I would be at the depot to meet them and to familiarise them with the workings of the depot, rotas, duties, duty plates, signing on procedures and at the end of the day paying in and signing the coach off. Next I would show them over the RF coach, let them settle in, change the blinds, set up their ticket machine, the Almex, get them relaxed and ready to pick up their first passenger.
Naturally some drivers found it easier than others. One driver was losing quite a bit of time and by the time we had reached Brent Cross an irate passenger was asking me if we would arrive at Victoria on time for him to make his onward connection at Victoria coach station. Knowing we wouldn’t I asked the trainee driver to pull up and I got out and hailed a London Cab and told the passenger to get in the cab and send the bill into us. He did, and I got quite a dressing down from our Chief Inspector Reg Goodchild for doing so, but I explained the passenger was of paramount importance and should be treated as such.
One interesting new driver was Anna Chadfield our first female driver and like me many years previously the youngest driver with London Country. Anna was full of confidence and learnt very quickly and was very competent. She was also very quick with a witty retort when ever confronted by an awkward passenger. One male passenger boarded at Victoria and looking at Anna said “oh a woman driver”
Anna took a quick look down the inside of her blouse and without hesitation said
“ you are quite right sir I’m a woman”
The man somewhat abashed sat down having received his ticket and a smile from Anna.
Bus and coach rotas rarely changed in those far off days unlike to day when rotas seemed to be changed every couple of months much to the confusion of both drivers and depot inspectors. At Tring the only change we had was the introduction of the summer coach rota when instead of terminating at Chelsham the coaches would continue to Chartwell, the home of the late Sir Winston Churchill. This meant that when Tring drivers arrived at Chelsham instead of pulling into the bus parking area at Chelsham we would stop outside the garage and a Chelsham diver would take over for the remaining journey to Chartwell. Most of the Tring drivers would stay on the coach and ride on to Chartwell and have a break there and then take over back at Chelsham for the trip back to Tring.
Posted by David at 12:11