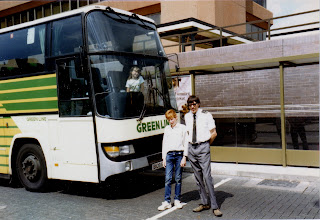 There were no meal beaks at our home garage all breaks being taken at either Heathrow Airport, Gatwick Airport or Staines garage. This had a monetary advantage as all breaks away from the home garage were paid through. When I worked for London Transport you were paid from sign on to sign off. So for example an eight hour day would start with fifteen minutes to prepare the bus, a period of driving, a meal break, (in some cases a spread over break of four hours) and then another period of driving and finally fifteen minutes to sign the bus off. That of course all changed with privatisation the fifteen minutes sign on and sign off came down to five minutes and payments for meal breaks were done away with. However the unions did manage to negotiate the payment for all meal breaks taken away from the home garage. This through payment plus a £10 weekly allowance for loading luggage made the Jetlink rota a well paid one. But of course management found a way around those payments. First they argued that if a canteen was available then no payment for meal breaks would be made. So only meal breaks at Heathrow and Gatwick were paid through. As for the luggage allowance, well greed will out and management were well aware of this. At the next wage negotiations management put it to the drivers that part of the pay award would include a luggage handling allowance of £2:00 a week for all drivers including drivers on the Jetlink rota. At the branch meeting we on the Jetlink rota were voted down when we tried to keep our £10:00 a week being told we were already better off with paid through meal breaks and tips, also we had new green and grey uniforms, talk about jealousy. In fact I remember one of those most vociferous of bus drivers later tried very hard to get on the Jetlink rota and eventually managed to. We lost £8:00 a week that year and things have gone down hill ever since.
For the first few weeks I and the other drivers whose meal breaks were taken at Heathrow used to go up to the top of the car park at terminal three and do a bit of plane spotting but once the novelty wore off it was back to finding somewhere cosy to have a meal and a sleep. I have always taken sandwiches and a flask of coffee or chocolate with me ever since I’ve been married and have been able to have a cooked meal at home. I found the best place to have a nice rest was the departure lounge in terminal three. Now-a-days resting in the arrival or departure lounges is strictly discouraged by the removal of all comfortable seating but back then comfortable seats were plentiful and I used to avail myself to one for a couple of hours. The only drawback was the very noisy cleaning lady who insisted on slamming down the metal covers on the numerous waste bins that she would empty every day just when I was dozing off.
Meal breaks at Gatwick were taken on the coach in the coach park as it was inconvenient to walk over to the south terminal, where we could get something to eat, in the short time we were at the airport.
Now meal breaks at Staines garage were a completely different experience. The drivers there were a great bunch of guys and girls. Pauline the canteen boss had the unenviable job of trying to control the drivers. Pauline had no trouble controlling her poor husband, also a driver, but she had plenty of trouble with the others. Two drivers come to mind, Micky Dunn and Roger Christmas. Micky and Roger were physically opposites. Micky very large and Roger quite small but both equal in causing disruption. One day Pauline was running around trying to find the milk which had been delivered in a crate that morning. Where did it turn up? In the luggage locker of a Jetlink coach at Heathrow. Then there was the time Roger opened the lockers on the coach at Heathrow to be greeted by a load of flashing road cones. If Roger or Micky were in the garage when a coach was about to leave for Heathrow it was always best to check it out first.
Later when the 747 was extended to Stanstead Airport our meal breaks were taken in the travel office in a separate room set aside for the Jetlink drivers.
Posted by David at 10:20