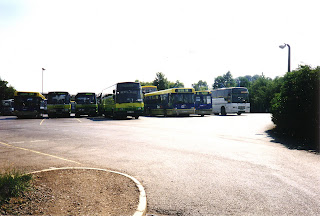 Rumours had been rife for some time that Hemel garage was to move to new premises and most believed it would entail a move to the industrial area of Hemel Hempstead at Maylands Avenue. At this time I was the TGWU Garage Representative (1995) and one bright summer morning my garage manager Neil Instrall said “come on I’ll take you to the new garage site.” I got in his car expecting to go up to Maylands Avenue, about ten minutes drive, instead we drove out of the garage, turned left, crossed the traffic lights and turned left again into Whiteleaf Road and drove up a steep hill to the old GPO maintenance depot, a one minute journey. I must admit it was a lovely site, very spacious, plenty of room for the drivers and the engineers and a lot newer than the old garage which had opened on the 10th April 1935
The old garage closed on July 22nd 1995 and my daughter Heather, who was now 18, was there helping with the clearing out, travelling with bits and pieces between the old and the new garage. Heather even made sure I had the best locker in the new conductors room. The name continues to be used to day even though we no longer have conductors.
With the new garage came new vehicles for the Jetlink, well as with Hemel Hempstead things were rarely new just other garages old vehicles. In this case a couple of crash box Volvos.
When I first took a PSV test the RT bus had a pre-select gear box but it entitled me to drive a crash gear box bus. London Transport lost a lot of new drivers who passed their tests on the easier pre-select box and then went to the provincial bus companies whose bus fleets were mainly crash gear box vehicles. To stop this haemorrhage of staff the new drivers passing their tests on a pre-select box could only drive a pre-select bus. As I mentioned earlier I had transferred to Amersham to regain my full license. Now I was the only driver in Hemel garage who held a full license and the only one entitled to drive the new Volvos. Being entitled to and being able to was in fact worlds apart as I soon found out. All the other drivers who had reason to drive the Jetlink coaches had to be upgraded to a full license which meant for them another PSV test. All that was required of me was to drive the vehicle around Hemel. With Vic Edwards, chief driving examiner, in the front seat we drove around Hemel. By the time we received these Volvos the gate in the gear box was already well worn and getting any gear was a hit and miss affair to say the least. For the next fifteen minutes all one heard was a load of crunching of gears and cursing from me. After a while Vic said “never mind you’ll get the hang of it by the time you’ve driven to Gatwick and back a couple of times.” As Vic said earlier he couldn’t fail me as I already had a full license, and he was right I soon got the hang of it. Mind you with such a worn gate if you pulled forwards onto a stop as at Luton bus station when you reversed out you let the clutch out very slowly just to make sure you were not in forward gear which could easily happen. I have followed other drivers including one of our Inspectors and always when pulling up behind them kept well back as when the lights changed to green the Volvo would reverse until the luckless driver would realise his mistake and quickly find a forward gear.
Soon everyone had settled into the new garage. It was nice to have a new canteen and after some initial shifting of furniture we manage to partition off the smokers from the food area, this was of course before the complete ban on smoking in all enclosed premises came into force. It must be a hierarchy thing but Neil Instrall the garage manager had a large office on the top floor whereas Bill Bailey the operations manager had a small office on the ground floor and the Union office was in the small first aid room.
Posted by David at 06:35