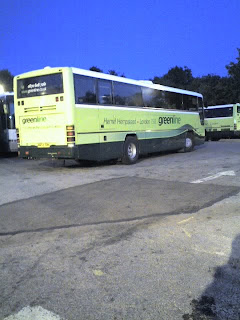 It was with great relief that I turned up for work as a driver on Monday June 16th 2008. There was a slight hiccough as Eric Beir our schedules manager checked with DVLA Swansea to make sure that the letter confirming the return of my PSV licence was valid. My actual PSV plastic licence arrived in the post a couple of weeks later, and that was a really wonderful day, just to hold that licence once again. Eric had arranged for me to spend a couple of days driving to London with a driving instructor to check out my driving. As luck would have it the instructor was an old friend Barry Neave. I had known Barry since starting at Hemel in 1972 when Barry was a fellow bus driver. Barry was due to retire in a couple of weeks and so on Monday I was looking forward to driving to London. Unfortunately nobody had informed the driving school, so no Barry. After a while checking out what had gone wrong Eric
suggested I go out and do some route learning. There were however very few alterations to the routes over the last year so I just made myself scarce for the rest of the day. I went around the town a couple of times then caught the Greenline to London and back.
Tuesday I reported for duty at 8 o'clock and this time Barry was there waiting for me. "Don't worry I'm not looking for faults, just enjoy your driving, this is just to make sure you are confident"
None the less it was still somewhat nerve racking driving out on the roads and the motorway after a year, and of course most odd when pulling up at Park Road where I had my stroke a year earlier. Having turned right into Baker Street Barry said " well that’s got that bit out of the way" Barry obviously realised what was going through my mind. One round trip to London was enough for the day. The next day we went to London but on the 748 route which goes via Camden Town , Kings Cross, Farringdon Road, Fleet Street, Parliament Square and the Embankment before reaching Victoria. I was now feeling a lot more confident and when we arrived back at Hemel Barry wished me good luck. I went in and saw Eric so that I could find out what I'd be doing for the next few days until I was back on a permanent rota position.
I soon settled back in and driving became a pleasure once more. I was certainly more relaxed, I no longer got upset if people used their phones but like all the drivers if somebody was talking extra loud you would gently remind them to be a bit quieter.
During my stay in hospital I had been visited by Dave Gill our branch secretary. At that time I did not believe I would be returning to work again and therefore I told Dave it would not be fair for the branch if I retained my
position as Health and Safety representative and so I tendered my resignation, much to my regret. No longer being Health and Safety representative meant that to continue my BA course at University I would have to attend in my own time and not get paid leave from the company. I wrote to the Managing Director who replied that they were now paying the new Health and Safety Representative paid time off to attend courses and that if I could show a business plan whereby my degree could help the company then he would pay for my attendance. As I would be retiring when I obtained my degree this was impracticable. I therefore had to attend university in either my holidays or just have a week off unpaid and this is what I did.
One small problem that had to be overcome was what to say to the regular passengers to whom I’d been so horrible to when I was so stressed out. Well an out and out apology was the only way and to my relief they were all so kind to me saying that they could tell I was going to have a heart attack or a stroke. I was able to thank those that helped when I had the stroke.
Soon things returned to normal, early turns where you are half asleep, late turns when you’ve spent the morning in the garden and don’t feel like going to work. I looked forward to going to university twice a year and to weekend courses at the T&G centre at Eastbourne. It would appear that things would now continue without much change for the next couple of years. Well nothing ever does that.
Posted by David at 06:45