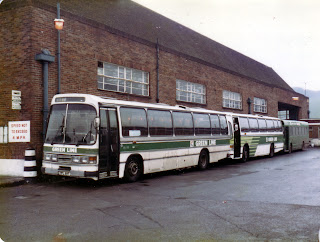 As I had mentioned earlier when I arrived at Amersham there were no Greenline services but that was now about to change. It was decided by the powers that be that a new service, the 790, should run from Amersham via High Wycombe and Uxbridge to Victoria. I had missed the Greenline coaches and applied for a position on the new rota. Not many of the Amersham drivers wanted the hassle of driving into London so the majority of the coach drivers on the new rota were ex Tring drivers. Soon a brand new Duple bodied AEC Reliant appeared in the yard ready for type training. Unfortunately the driving school were in dispute with management and were refusing to undertake any driving instruction. However mindful of public safety the Chief Driving Instructor Mr Durelli took it upon himself to allow us cab training. This meant we could sit in the cab but not start up the vehicle and we could familiarise ourselves with the controls. We were however each given a handout showing us all the various controls.
Fortunately we had done route learning although in an MB bus. I remember pulling away from Victoria with the Inspector who was showing us the route saying to the rest of the drivers, now watch how David does this as he is an experienced coach driver, that was a feather in my cap.
The first day of operation, a Monday, was a damp foggy day. Mr Durelli had decided to travel with each driver between Amersham and High Wycombe so
that the drivers could sort out any problems before continuing to London. With the passengers already on board I made myself comfortable at the wheel and proceeded to get out the hand out and in full view of the passengers and set about starting up the coach and turning on the lights. At this point I turned to Mr Durelli and said “Where are the fog light switches”? much to the amusement of the passengers. Equally amusing was Mr Durelli’s reply, “I don’t know, I don’t even know if this coach is fitted with fog lights, I’ll get out and have a look” As it happened there were no fog lights and therefore no fog light switches. The fog soon lifted and I really enjoyed driving to Victoria. Driving into Uxbridge brought back many memories, of my time there when Annette and I were first married and to see on occasions Hemel Hempstead drivers on the 347s from the days back in 1972when I first started at Hemel garage. It was a pleasant drive to Victoria and back and two trips a day were not too arduous.
There is always an exception to the rule. Throughout my driving career Annette has always come out for the odd ride or two when I’ve been driving and we thought it would be a nice ride out for her and the children if they all came for a ride with me to London and back. Mark was five years old and thoroughly enjoyed himself, Heather who was a one year old did not. We pulled into Uxbridge and Heather was crying for a feed so to help Annette I held her on my lap at the steering wheel and fed her a bottle. But soon after departure Heather was crying again wanting to get on the floor, and then back on Annette's lap and then on the floor again, her nice clean clothes getting dirtier all the time. After an hour of crying and playing up we finally arrived in Victoria where she received a smack on the bottom for misbehaving and promptly fell asleep for the return journey. Even the revenue Inspector, Bob Gilbert, who boarded the coach just as we left Victoria remarked on how well behaved both children were.
We were now entering the era of efficient management. This in reality meant more work for the same pay for the drivers. One of the casualties was the Greenline workings. To make it more efficient the drivers were to work less hours and get paid less. This appealed to some of the older drivers but with two children and a mortgage I could no longer afford to stay on the Greenline. So back to bus work.
I mentioned earlier when Tring closed six drivers transferred to Hemel Hempstead and six of us transferred to Amersham. With the alteration to the coach rota three of the drivers left. Soon another driver transferred to Hemel Hempstead. After a while I found I was the last driver from Tring at Amersham. What with no Greenline work and the feeling that most of my former Tring colleagues were at Hemel Hempstead I decided to transfer to Hemel Hempstead, the garage I started at upon returning from Australia.
Posted by David at 10:24