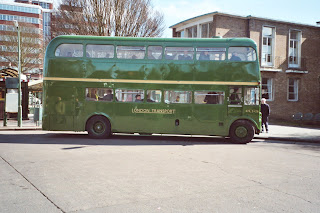 It was good to be back and my entrance into the canteen was warmly welcomed by my ex Tring colleagues and those older Hemel drivers who remembered me from some years earlier.
Both routes and management had changed since I had last worked at Hemel. The kindly father figure of Chief Inspector Reg Goodchild had been replaced by Chief Inspector Arthur Harris. Unlike Chief Inspector ‘Jerry’ Coe who welcomed me to Amersham with a smile and a hand shake, the first time I saw Arthur Harris was on my first discipline. I was most put out that the Chief Inspector could not be bothered to see me and welcome me to Hemel Hempstead and I told him so when I went in for that discipline.
I did not do any route learning as the long distance route like 330 to Welwyn Garden City and the 347 to Uxbridge had not changed. The town service had been revamped to one man operation but for this I just opened up the map in the timetable and followed that around the town. After awhile Hemel Hempstead became more familiar to me than my home town of Aylesbury. After two years away it seemed strange to be driving over the routes I first encountered on my return from Australia.
Although I was not officially due to start at Hemel until the Monday, due to their staff shortage of coach drivers, I was asked by the duty inspector at Amersham if I would care to work my rest day on the 708 Greenline to Victoria on the Saturday. Well I knew the route so why not.
No one had told me that from October 1977 the 708 went via Brent Cross Shopping Centre.
I turned left at Staples Corner and was completely bewildered. Fortunately one of our bus drivers, ‘Lofty Price’, was on board. “Hey Lofty give us a hand, show us the way into Brent cross will you” Lofty came and stood beside me, soon we were both lost. “Talk about the blind leading the blind” called out one of our passengers who then proceeded to guide me into Brent Cross shopping Centre.
Originally both the 708 and the 706 used to go along the Edgware Road via Cricklewood and Kilburn. At the end of Kilburn High Road was a Zebra crossing and with people crossing all the time delays were becoming more and more frequent. To help speed up the journey times all coaches were now sent along the North Circular to turn right onto Hendon Way and then right onto the Finchely Road. Ironically just after this new routing was instigated pedestrian lights were installed on the crossing in Kilburn solving the long hold ups.
Now all shopping centres are horrendous for traffic especially on Saturdays and Brent Cross was no exception. It reached the point where it was taking as long to get into and out of Brent Cross as it was for the rest of the journey to Victoria. Management then wisely stopped the coaches going into the shopping centre and instead had us stop close by on the North Circular Road.
Over time most routes have minor changes to them because of new housing estates or new railway forecourt developments. One day while still at Tring I was asked to work a rest day at Hemel Hempstead on route 330 to Welwyn Garden City a route I had driven over with Routemasters when I started there in 1972. Hemel now had RMCs on this route, a Routemaster which had doors at the rear. I met the conductor in the conductors room and said I should be ok even after a few years away from the route. After leaving Hemel my first stop was up near Bennetts End Road. I pulled up and waited for the passengers to get on. I could see them in my nearside mirror and wondered why they were not boarding when I heard a tapping on the saloon window behind me. The conductor was frantically waving his hand about and pointing at some buttons beside my right hand. On close inspection I saw these were door operating buttons. Well I didn’t know only the driver could open the rear doors on the RMC although the conductor could close them. After that hiccough I continued all the way to the terminus at the QEII hospital at Welwyn Garden City. Climbing down from the cab I went back to see the conductor and said “well I found the way ok after all this time.”
“Nearly mate, except you missed out St Albans railway station, why do you think I was waving left as we went over the bridge.” I had thought he was just reminding me to bare left at the end of the road. Unbeknown to me St Albans city council had built a bus and rail interchange at the station which we now serve by turning into the station, well not on that journey we didn’t.
Posted by David at 03:12