Chapter 16 Who is watching over you? 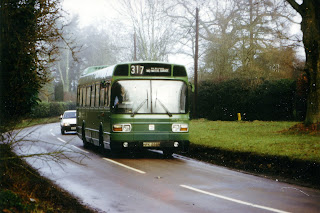 No matter where or when, there is always someone watching you. Most of the time it is uniform inspectors. The first time I encountered this phenomena was the Gold Badge Inspector who boarded my bus when I was training back in 1967. There was no excuse for not knowing about being observed, you were told in the driving school that either plain clothed or uniform inspectors would check your driving during you first few months. I was driving the 706 Greenline from Chelsham, when arriving at Croydon, Mr Durelli the Chief Driving instructor boarded my coach. Well I considered my driving up to scratch and continued driving forgetting all about Mr Durelli sitting at the back. However whilst sitting at the traffic lights on Streatham Hill Mr Durelli came forward and informed me that since he had boarded at Croydon I had not once engaged neutral gear. Oops, even with a pre-select box you are supposed to engage neutral when standing for any length of time. I have since discussed this with engineers who actually differ with this line of thought saying it puts less strain on the gear box if it is left in gear.
I have already mentioned being caught out by Inspector Ron Wright who happened to be on duty at midnight at Tring and booked me for running four minutes early. I imagine I have had my share of plain clothes revenue inspectors board my bus but I suppose my driving and issuing of tickets must have been ok. There have been many times when passengers have, after sitting down, come back to me and told me I did not give them a ticket. This is often said with inference that I had pocketed the fare. My usual response is to ask them if they had taken their ticket. I then get up and check all the passengers tickets and sure enough you will find that the passenger complaining had not taken their ticket and the following passenger, without bothering to check their ticket, has taken two tickets much to the chagrin of both passengers.
Well who checks the Inspectors, well somebody does. There was an Inspector at Amersham who had a side line in a taxi service which would have been ok if he had kept this side line to his off duty time. However he would often inform the office that he was just popping out to do
a bit of checking but would go and do a little bit of taxi work. Someone must have got wise to this and one morning whilst on duty, he received a call to go and pick up someone at Chalfont and Latimer Station. Unfortunately the passengers to be picked up were company officials who had made the phone call. Result, instant dismissal.
There were occasions when doing a second job could prove to be handy. One driver also had a hand in running a private coach company. During a period of severe fuel shortages (I cannot remember the reason for this) his company had fuel to spare and we ended up ferrying our buses over to his depot to fuel our buses, a very nice little earner for him. I cannot see to-days management agreeing to anything like that to keep the buses running.
Someone at Hemel Hempstead should have been keeping an eye on one of our inspectors (I will not mention his name but many will remember the incident). Part of the yard was being replaced and the contractors had left a compressor in the yard over the weekend. On the Sunday morning two workers turned up and asked if the inspector could move a couple of buses so that they could remove their compressor as they needed it for another job.
Red faces all around when on Monday morning the contractors turned up and asked who had stolen their compressor. Yes poor old Inspector ****** had helped a couple of thieves take away the contractors compressor.
Why was the yard being replaced? Well water used to wash the buses use to run down the yard and out into the road. To stop this concrete ramps were placed across the bottom of the yard. Over a period of time the ramps became worn with the iron reinforcement poking through. One dark evening one of our drivers was walking down the yard with his ticket machine box under one arm and his cash tray under the other. Catching his foot on the broken ramp he fell down and tore both ligaments on his shoulder.
Now how the company thought they could get away with not admitting liability I don’t know why but they tried. The first thing they claimed was that there were no ramps there in the first place. Fortunately another drivers had been taking photos in the yard the day before which clearly showed the ramps and the condition they were in.
After a long time and many solicitors letters the company finally admitted liability and our driver received compensation for his injuries. As I said someone must keep an eye on the watchers.
Posted by David at 02:54